A short story for families and children of all ages

There once was a King who lived high atop a mountain in a castle so beautiful that none could match its splendor. The castle shone like a diamond and no matter how far away in the kingdom one was, the sparkling light from the mountain could always be seen. 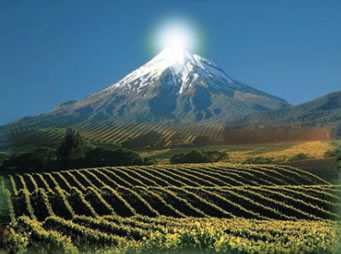 The kingdom was lush with fertile valleys, meadows, vineyards and orchards which produced, by the work of human hands, nourishment for those who lived there.

Great rivers crisscrossed the land bringing trade from the farthest borders of the kingdom and the marketplaces provided the people with all manner of tasty foods and interesting wares.

The King greatly loved his people and they loved and trusted him in return. The King’s mother (who was a perfect mother) loved the people as her own family and helped her son care for them. There was much peace, love and joy in the kingdom, whether in the marketplace, the workplace or homes, but especially in homes, because that’s where families live.

There were small castles throughout the kingdom where the King would visit with his people. Once a week bells would cheerfully ring, telling everyone the King was present and inviting them to visit with him. Those days were a wonderful time of celebration and feasting.

Families enjoyed spending time with their King and with friends and neighbours and all the little children adored playing in the King’s presence. The King was kind, wise and forgiving. He would listen as, one at a time, his people would open their hearts to him and when they had finished, their cares would disappear, like teardrops in the ocean.

Such was life in the kingdom, until peddlers came from outside the borders. They tempted the people with ointments, toys and trinkets, promising such things would make them happier if they owned them. Alas, the people believed the peddlers and put all their trust in their wares.

At first life in the kingdom was no different but slowly it changed. Trying to be happier, many people spent much of their time with their ointments, toys and trinkets and were less interested in making time for their friends and neighbours. Then families became troubled.

Grandparents quarreled with parents, fathers and mothers disagreed, brothers and sisters fought, even the little children squabbled. Families started arguing over their ointments, toys and trinkets and sometimes, over nothing at all. The people in the kingdom knew something was terribly wrong but didn’t know how to remedy it so they blamed others for their unhappiness. The people’s love grew cold and they became hard of heart and unforgiving.

As this was happening, a dark cloud had begun to creep over the land and now was so thick that the sparkling light from the mountain could no longer be seen. Living in deep darkness, many people stopped visiting the castles. They forgot about their King, their heartfelt talks with him and the love they had felt in his Presence. They grew weary of their gloomy lives and gave up on ever being happy again. The lush lands of the kingdom were forsaken and withered and died. The people were terribly unhappy and lost in the darkness.

The King loved his people too much to allow their suffering to continue. He decided to open wide the doors to his castles and invite everyone in. The King was going to use Mercy, his priceless treasure, as a medicine to cure the people of their unhappiness and to show them the way out of the darkness.

The King made a solemn proclamation : “I declare this a Year of Great Favour. Special doors will be marked and opened wide so everyone may enter my castles and receive my great treasure. Anyone may have as much of my treasure as they desire.” Messengers were sent throughout the kingdom to herald the Great Year that was upon the people.

As the good news spread, even more people came, and returned again and again, for the King’s Mercy. The greater their need, the more generous was the King. The people now understood that the King’s Mercy was without limit and remembered how loving and forgiving their King was and always had been. Then, to their great joy, the land returned to life and was in full blossom, as if it had only been asleep.

Families were the first to throw away their ointments, toys and trinkets, then everyone else followed. It was a hard decision but once made, everyone was greatly relieved. They felt as if they had awoken from a bad dream. The people were so happy now that they laughed and sang as loud as they could. They jumped for joy and danced in the streets. Everyone hugged and forgave each other. They shared their happiness, their love and the King’s endless Mercy with each other.

A wonderful peace returned to the people in the kingdom because they put all their faith and trust in the King again. It was shouted from the rooftops that he was indeed the King of Kings and then they gave his mountain a name. They called it Mount Mercy, because the King who lives there is Mercy itself.

“Spread love everywhere you go : first of all in your own house.” – Blessed Mother Teresa