Father Louis Querbes, founder of the Clerics of St-Viateur

It was the time of the French Revolution and bloodlust was ravaging its way through France. Under the pretext of “Liberté, Égalité, Fraternité”, the Reign of Terror was slaughtering thousands of innocents and imprisoning or exiling thousands more. Guillotines were set up in town squares and people fled for their lives.

The Catholic Church, seen as an ally of the French establishment, became another enemy of the Republic. Nuns, priests and religious were dragged from their convents and churches, marched up the stairs and beheaded. Only those who denied their faith were spared their lives. The Church was laicized by the government and pillaging and sacrilegious desecrations of churches were rampant. Under the guise of justice, chaos and madness ruled. 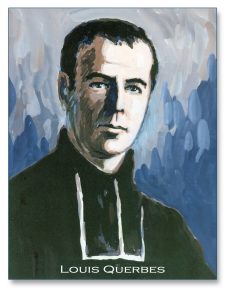 But not all the people of France embraced this new savagery. There were areas of the country still loyal to King and Church. The town of Lyon was one such place. It set up barricades against the onslaught and withstood two months of constant shelling before its defenses collapsed. Overrun, the town was forced to surrender and many were captured and sentenced to death.

One loyal defender was Joseph Querbes, a young tailor who was taken prisoner but managed to escape. His wife Jeanne and their infant child Louis had earlier escaped death during the bombardment when a cannon shell destroyed their home.

The terrified mother had wrapped her baby in an apron, ran for safety and hid. In time, the horrors and executions ended and the Querbes family was reunited. Finally an agreement was signed, allowing the Church to openly practice the Faith. 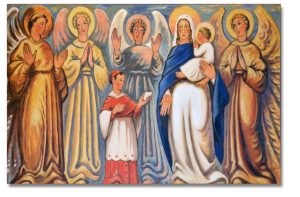 The young child Louis was able to learn the Faith in the safety of his parents’ home. He attended the parish school and though but a youngster, was recognized for his Christian virtue.

Before young Louis made his First Communion, a remarkable thing occurred : he made a lifelong vow of chastity! He wrote his vow on a card with a picture of the Assumption of the Blessed Virgin Mary and Our Lady would forever be in his life.

Drawn to religious life, Louis answered God’s call and entered the seminary. After studying and teaching, he became a priest in the Diocese of Lyon and was assigned to the parish of St. Nizier. 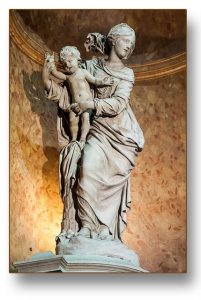 Father Louis’ warmth, piety and compassion soon endeared him to the parishioners. His intelligence, zeal and strength of character shone through his inspired homilies and converted many. Father Louis established and made popular the “Month of Mary”, an important contribution to the spiritual revival of his parish.

Still a young priest and because of his success at St. Nizier, Father Querbes was assigned pastor of the rural parish in Vourles, a small village on the outskirts of Lyon.

Most of the villagers were indifferent but many, supporters of the Revolution, remained bitterly hostile to the Faith and upon his arrival, Father Louis was met with insults and threats. 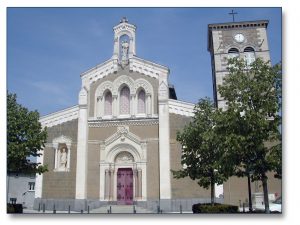 The parish was hardly functioning, the church was in desperate need of repair and the rectory was scarcely more than four crumbling walls. What remained of the little parish school was in shambles. The Revolution and the villagers of Vourles had broken the spirit of their last four pastors and left their parish in ruins.

With great faith, Father Louis consecrated his efforts to Our Lady and slowly things changed in the parish. He still received threats but greeted them with good humor and tirelessly sought out the indifferent and hostile.

Father Louis preached not with an aloof intellectualism but with passion and a Gospel simplicity that touched people’s hearts. His love of good liturgy was well known and he took great efforts to have everyone fully participate at Mass. Father, who loved singing, updated the hymnal, started a perpetual Rosary group, established the Month of Mary and gave many retreats.

Through kindness and compassion, Father Louis began to win over his adversaries and eventually people of means came forward to offer their support. As his reputation grew, neighboring parishes began seeking Father Louis’ help. From the ashes left by the Revolution, the Holy Spirit used Father Louis to stir up new life in a little corner of France.

News of Father Louis’ success spread throughout the diocese and rumors began to circulate that he might be transferred to a parish in greater need or even appointed head of the seminary. Unknown to the good priest, a petition, signed by nearly the entire village, was presented to the bishop demanding that Father Louis be allowed to remain with them. It was an extraordinary change of heart for a people whose hostility four short years earlier had bitterly opposed his arrival!

While Father Louis had great success with his parish, the parish schools were still plagued with problems. The effects of the Revolution had virtually destroyed France’s educational system and the worst affected were schools in rural areas. There was no money to pay teachers and the quality of teaching became deplorable. Teaching was an undesirable occupation, avoided by all but the radical and anti-clerical, whose true intent was to undermine the Church.

Undeterred, Father Louis found a community of Sisters willing to teach the girls of his parish but the boys were another problem. The small rectory served as the boys’ classroom by day and Father’s bedroom by night. The young man, who had been assisting Father Louis as teacher and sacristan, left for the seminary. Father Louis couldn’t possibly teach them all and needed help, but his pleas to religious communities fell on deaf ears.

Father Louis saw the need for an association of devout men that could send members as needed to assist overwhelmed pastors in remote parishes as teachers, catechists and sacristans. So Father Louis called upon St. Viateur, Lyon’s famous fourth century catechist, to be his group’s patron, name sake and model.

Father Louis gathered together a small group of capable and pious men and gave them proper formation. Before going on a mission, they would assemble before a statue of Mary and Father Louis would consecrate them and their efforts to Our Lady’s tender care.

From this inspired vision came the beginnings of the order of the Clerics of St-Viateur. From the need to teach poor children in a remote village in France grew a worldwide ministry whose principal charism is education.

Not without difficulties, not without obstacles, not without persecutions, the Clerics of St-Viateur grew to the thousands. They are present on every continent around the world.

They built and minister in schools, colleges, parishes, hospitals, and seminaries and are renowned for their work with the deaf and mute. From universities in Europe to the rivers of the Amazon jungle, from the Far East to equatorial Africa, they continue to build up the Kingdom of Heaven.

True to their founder’s devotion to Mary, the Clerics of St-Viateur built a beautiful sanctuary honouring Our Lady of Lourdes on the side of a mountain in the little town of Rigaud, Quebec.

When the Lord cast his seeds on the life of Louis Querbes he found good soil. Father Louis produced a harvest many times more than a hundredfold and his spiritual descendants, the priests, brothers and lay associates of the Clerics of St-Viateur, are still producing good fruit. It is wonderful to see what God does through those who give their lives to Christ.

Father Louis Querbes, pray for us and all who read your story.